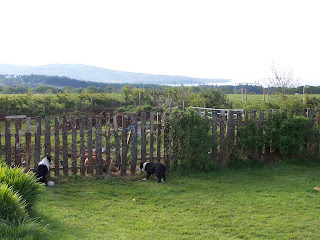 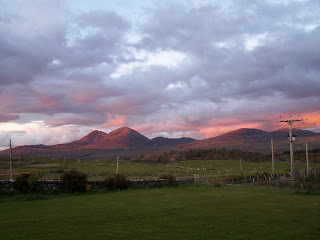 I totally overcame any fears I had of getting close to the pigs yesterday, I had no choice. The happy farmer away, I went on my morning feeding rounds, got to the pigs, they looked at me, grunted, looked at their empty trough, jumped in it, grunted, and made sure I was aware that they had finished their water, a job the happy farmer had assured me I wouldn’t need to worry about. You see to fill the trough entails a journey into the pigs’ enclosure. While most of you had a weekend of torrential rain, the sun didn’t stop shining here and the trough was dry.

I filled a bucket with water, braced myself and climbed in with the snorting, grunting pigs, who immediately started to squeal with excitement, chasing at my heels, as I closed my eyes and tried to ignore them, reaching the trough at last, pouring the water in and luckily that took their attention away from me. Phew, much to my relief they didn’t want to eat my legs after all! I felt incredibly brave after that, but worse was to follow, and by now you will all have me down as a complete wimp, while I see myself as aspiring to step into the shoes of the happy farmer, going about my duties with a confident air, well almost.

Everything was going like clockwork, the happy farmer and eldest daughter were due off the late afternoon plane. Roast beef was in the rayburn, slowly cooking away all afternoon, all the veg prepared, I had worked out that it would be cooked in the hour it would take me to get to the airport and back if I sat it on the rayburn as I was leaving. Yorkshire puds cooked and in the bottom oven with the now sliced meat sitting in a dish of thick gravy, when I heard squealing children, and looked into the garden to see that the pigs had made a hole in the fence and were being rounded up by a very happy sheepdog as they all played chasey round the garden. Now this is where the farming skills become really quite impressive, I shut the sheep dog in the kitchen, raced and got a bucket of feed from the shed, and this is where the phrase ‘as greedy as a pig’ comes in, I hopped into the pigs enclosure, second time in a day, and emptied out the bucket of food. Those greedy pigs came running, found their way back through the hole, no problem, and began gobbling away. I meanwhile got some old plastic deck chairs and secured them over the hole, I couldn’t quite stretch my farming skills to putting up a new fence, well not today anyway. I just had time to put on some ‘lippy’, before rounding up the children and racing out the door to go and collect the happy farmer and daughter from the airport.

Of course the pigs knocked down the deck chairs, and found their way happily back into the garden, but they didn’t do too much damage, just managed to pull the washing off the line and trample all over it. Maybe I will leave the farming to the happy farmer after all! It took him about two minutes to round up the pigs, although he did use my technique of the pig food, and another two to fix the hole!

The farmer and our daughter had a very successful weekend too, judging by the huge pile of shopping bags that accompanied my daughter off the plane. They fell in love with the horse too, he was just perfect, and will be joining us at his new home here on the farm shortly.

Until next time…
PS I loved all of your comments on the chicken fillets, was thinking of exmoor Jane's comment that you would never go hungry with a chicken fillet in your bra, got my imagination going. For a super huge clevage, place charcoal in the bra, under the chicken fillets, raw for this style, and once you set the barbie a light your clevage would be hot stuff and of course you would have a dish to eat later!!...Wish I had Blossom's cartoon skills for this one!
Posted by Posie at 14:02

Oh I do love reading your blogs Rosie. I really admire you and your life. Those pigs sound a riot!

I laughed out loud at your last blog too-thought only I was gullible!!

Really amusing-cheered me no end.

Pigs!!! I once bought two Vietnamese Pot Bellied Pigs for my daughter, what a msitake, thye lived for years, they fell in the swin=mming pool and trashed the garden. Looking forward to hearing about the new horse.
Blossom

Will think about the chicken fillets.

You sound super confident and capable to me! I'm sure if it had been me the pigs would have somwhoe got into the house. Glad the trip was a successs - sounds expensive though, clothes and horses!

I love pigs we had a big pig farm near us as a child and used to climb into the fields and scratch them behind their ears which they loved. Not sure I would do it now!

Wow love that photo of the dark and cloudy reddish sky.

Great blog as ever.

Oh I love pigs - not enough to actually own any though . . . .my friends offered me their two pot bellies when they left - but it was say no to the pigs or hellooo divorce. Reluctantly I chose no pigs!

l love pigs & crackling! Great photo of mountains too. Used to help some friends with their pigs whilst they were building their house.

Loved your pig-coralling story! It reminded me of being at the Great Dane's cousin's pig farm in Denmark. I went out to put out the washing one morning and came face to face with the happiest sow! She was as big as a small car. Needless to say, I took the coward's way out and called for the cousins to get the pig back inside.
You are SO competent - all that and lipstick too!

Well done you! I think you need to give yourself more credit for your abilities. Lovely picture!

Thats one thing i wouldnt like squealing pigs all around my legs, no idea why.. have you got water yet???

proper country living - I hope the Green Duck is watching. Not quite so envious of your pigs now!

think i will stick with the coming chicks and give pigs a miss for now - sounds a step too far!

I wish you could to as it woulld be interesting to see.

Love pigs don't love the idea of being farmer not even for a day hate the mornings too much.

Your life does sound good though.

Open Eyes Blinded By The Knowledge Of All That Is said...

I love the pictures you have posted!! Are these from your area? It is quite beautiful...