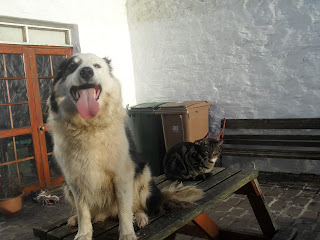 Sunday evening in the winter is paper time for the boys. The mainland ferry brings the papers to the island late on Sunday afternoon and the happy farmer heads off to the village stores to buy his papers and invariably meets up with Farmer T and then they tend to pay a visit to the local hostelry for what is supposed to be a quick and light refreshment before heading home. 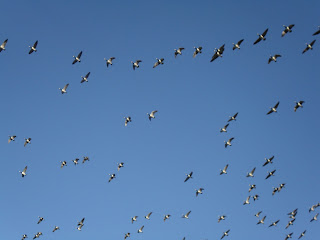 The ‘refreshment’ on a Sunday has become another deeply embedded weekly farming ritual which has quickly gained support from the Jura ferryman, the beady eyed woodcock, the roddy exterminator and a few other likely characters. Invariably the wives have now become integrated into the Sunday ritual too, but only in the form of having to ferry them to and from the paper round on Sundays. The ‘ritual’ generally involves a few pints, a few local characters and invariably forgetting to bring those papers home, although recently since the kids have started to add various necessities of the sweetie variety to his shopping list this service has somewhat improved, as while a bit of nagging from the wife puts him neither up nor down, sweets left behind opens up a whole new dimension when it comes to moans and groans. 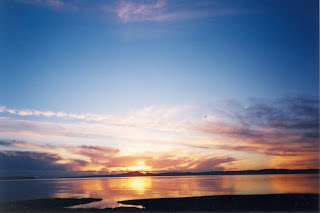 Last Sunday the paper ritual was further enhanced when walking into the pub the happy farmer walked into the middle of a culinary experience. The ex local game keeper and a gathering of local characters were hosting a cooking competition of local produce. On the menu was beady eyed woodcock with his pheasants and venison, all smoked, grey lag from an upstanding character, to a general display of game and seafood from chefs, and dishes presented by an odd visitor. The judges consisted of a factor, an ex factor and a man who knows his lamb chop casseroles well. The competition was taken very seriously by both competitors and judges, with the happy farmer and Farmer T getting to sample each dish. A platter of muscles cooked in a thai sauce won first place. The happy farmer arrived home very full complete with recipes, papers and sweets....another farming ritual that involves 'muscles'
Until next time.....
Posted by Posie at 09:53 12 comments: 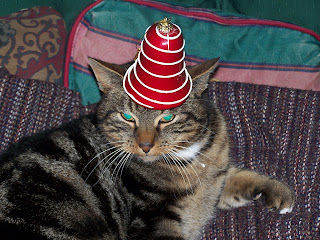 Saturday brought a hard frost, with clear skies, the sun hanging low in the sky. The happy farmer finally got his ridging finished on the roof of the extension, finally the roof is on, slates in place, it will hopefully last for many years to come. 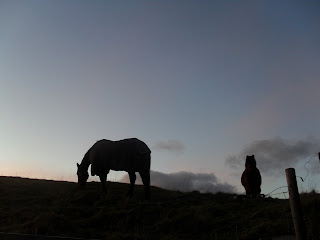 The BT boys arrived in the afternoon and joined the happy farmer as he got to work with a post hole borer in the horses field. Months of relentless nagging from eldest daughter, and the constant promises that the minute the extension roof was finished, finally saw the happy farmer making progress with the beginnings of a horse shelter. 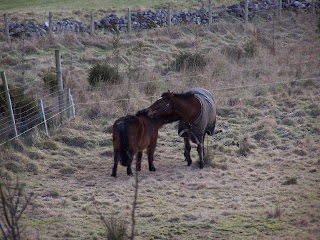 Son arrived home from football training in a blaze of glory. Last night, at the annual presentation evening of the Boys Football Team, he was awarded the trophy for runner up as the under 14s most improved player. A curry bubbling away on the Rayburn I managed to persuade him and youngest to join me on a stroll to the woods in the late afternoon. The skies glazed over with a purple pink hue we made our way through the fields and across the road to the track that leads to Lily Loch, son kicking a football along the way. Disaster struck when the ball went flying off the track and down the waterfall of the burn that feeds the sewage plant. It was mother who saw herself, kitted out inappropriately in tights and skirt, scrambling down the bramble laden steep slope to the pool where the ball had managed to lodge itself, followed by son, who hung onto my jacket for dear life as I reached out across the burn to grab a long stick with which to free the ball as it dislodged and made its way further downstream. The huge grin that met me when I handed over the rescued ball made it all worth while, and thankfully those tights escaped relatively unscathed. 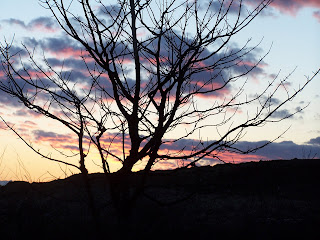 The was frozen solid so as the sun set in the sky. We skimmed pebbles across its surface, son’s pebble winning the distance competition by far. It was a challenge to see who could throw a heavy stone hard enough to shatter the ice. Finally we headed home in the dusk along the track and back to the warm glow of the farmhouse where the happy farmer and the BT boys were sampling this year’s sloe gin. It takes many days of sampling you understand to get the flavour just right. 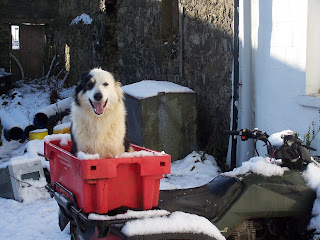 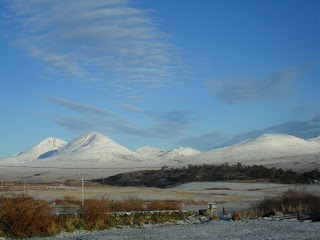 The first weekend in December we awoke on the Saturday morning to find the landscape transported into a winter wonderland with a thick carpet of white snow. The happy farmer groaned as the youngest squealed with delight. Intermittent blizzards for the remainder of the day ensured a great weekend of down hill tobogganing, with not a sledge in sight; improvisation and ingenuity were called for.  Early attempts had the kids sliding down the hills in bin liners, these were then replaced with metal trays, the lovely Edinburgh castle tray my mother in law had bought me years ago came into its own as they shrieked and squealed, slipping down the slopes at some speed before turning a few spins as it sped to the flatter levels. The roar of the quad bike signalled the happy farmer’s sledging invention, a thick piece of rubber matting with a rope attached to the front for extra steerage. 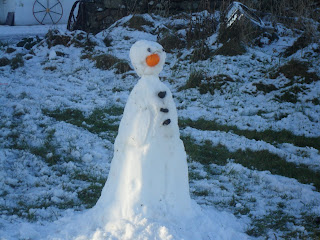 On Saturday such was the thickness of the snow and the fierceness of the blizzards that when I set out to drop eldest from the hairdressers I made it to the top of the village before giving up, abandoning my trip, and heading home again. The happy farmer is much more experienced at driving in awful conditions, and as my wheels spun once again as I hit the breaks I was glad to make it back to the safety of the farmyard with no collisions. The happy farmer took over the expedition in the jeep instead, only to find that just beyond the village there was not an inch of snow to be seen, the roads were completely clear, and the fields bare.
Sunday then saw us inviting friends and children from other corners of the island where no snow lay to come and spend an afternoon sledging. The happy farmer loaded the children into the trailer on the quad and sped off to the steep field, my friend and I preferring to walk across the fields, crunching our way through the snow. 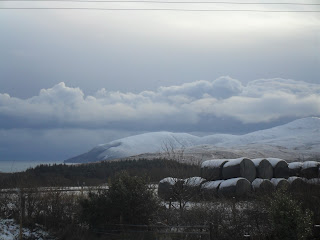 Having grown up in the town, there was always plenty of thick snow in the winter months, but in no time at all it would be full of footprints and tyre marks, before turning to toffee coloured slush and ice. I can remember looking longingly into the gardens of the pensioners, who didn’t venture out in such conditions, their gardens crisp and white. It used think it such a waste of good snow. Our own garden of course would be a mass of footprints, with snow heaped up to form a snow den. Each year we would try our best to build an igloo, my brother carefully moulding blocks of snow, bossing me around, as I dutifully got frozen fingers heaving it into position. We never quite had enough snow or skill to master the roof. I would sit out for ages in the dark in my snow den, with a cold wet bottom and frozen fingers, chuffed to bits to be in my ‘new home’, until eventually I could bear the freezing temperatures no more and would retreat into the warmth of the house hoping for more snow in the night. We used to spend many evenings sledging down the hill, its surface flattened and smoothed by all of the cars during the day, made the perfect slippery surface for sledging down at night, as it formed a magical carpet, the snow glistening and glinting in the light of the street lamps.
I stood and watched at the weekend, as my children and their friends began to form happy childhood memories of their own as they raced one another down the steep field on metal trays, rubber matting and bin liners, their cheeks rosy and their gloves cold and wet.
Until next time….
Posted by Posie at 11:10 4 comments: