We are now offering beauty treatments of a particular kind on the farm.... 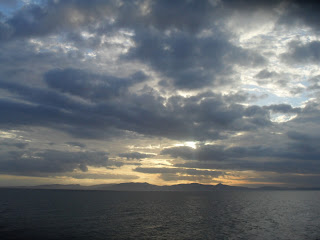 It appears we are now offering beauty treatments on the farm. Mist the sheepdog and Ruby the pup are both sporting beautifully shiny and glossy coats. After much pestering Mist finally gave in and decided to share her beauty secrets with Ruby....at least one egg a day apparently, but preferably more, and the fresher the better. Now I have been searching for Charlie's nest for a while, but could not locate those eggs anywhere. The other three 'ladies', Henrietta Eggberta, so beautifully named by youngest, and her pals, Joey and Frankie (yes youngest informed me when I questioned the origin of the names, that she loves the fact that you can use 'boys' names for girls) have all been laying away somewhere in the hedgerow.
Ruby the pup took the liberty of trying out her new found beauty treatment, and appeared the other day, not with a glossy shiny coat, but a sticky, gooey, egg covered coat, matted with the odd bit of egg shell here and there. Thankfully those eggs were fresh eggs, a must have tip from the sheep dog obviously, so we were at least not subjected to a week or so of rotten egg aromas in  the farmhouse. Ruby has obviously realised her mistake and has not come home covered in egg again, but is laying egg shells all over the place when she relieves herself, and has been known to add a very particular scent to the farmhouse with the odd bit of wind in the evenings.
She did kindly lead me to one of the hen's nests, but being a trifle greedy she helped herself to all of the eggs, so the hen has taken her nest off elsewhere. 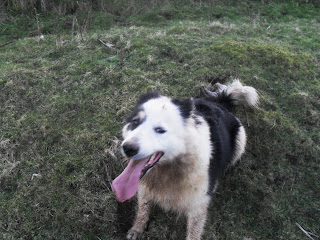 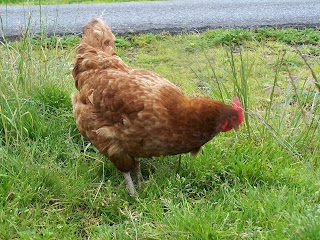 Meanwhile Charlie is not put up nor down by all of the fuss, in fact I rather suspect she positively encouraged those dogs, as she has now deserted Eggbert Henrietta, Joey and Frankie in the hen coop, and has taken to roosting in the dog kennel with Mist the sheepdog at night. However do not be fooled Charlie does not think she is a sheepdog, no that nutty hen is in training to be the happy farmer methinks, as every time he leaves the door open to his building work, Charlie is in there strutting about, clucking away expressing her approval of the new extension, inspecting the building works.
Horror of horrors, you don't think she thinks he is building her a new hen house do you???
Posted by Posie at 14:11 17 comments:

Gobbled up by Sea Eagles....almost 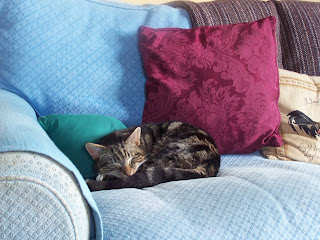 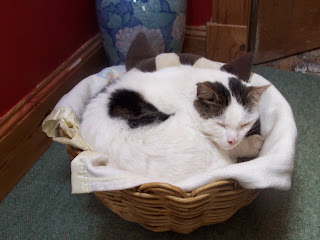 The morning started with a cat fight, literally. Spog, the cowboy, I mean cat, was standing guard in the middle of the single track road, I was alerted to his presence as I made my way over to the pottery in the sunshine. It was the high pitched yowls that did it, Spog positively strutting, prowling back and forth, circling, and looking ready to draw his gun at any moment. Suddenly Henrik appeared from nowhere, and darted across the road. Spog was like lightening on his tail, the air filled with the hissing, spitting and shrieking as Henrik cowered into the hedgerow and Spog stood over him, tail wagging, menacing eyes fixated. Of course I completely ruined the moment, venturing in, easing a very angry Spog out of the way with my foot, as I rescued Henrik and lifted him up over the dry stone dyke and into the garden. Spog was not impressed and spent over an hour prowling around the entrance to the farm, before finally giving in and arriving at the back door for some breakfast. 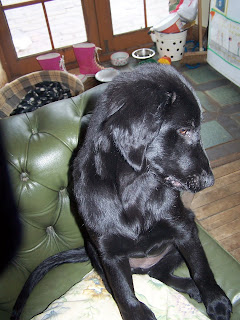 Youngest and I have taken to walking Ruby pup in the early evenings. We head across the field to join the path that leads to the tree swing and then onto Lilly Loch, where Ruby gets to dive into the cool waters after sticks. 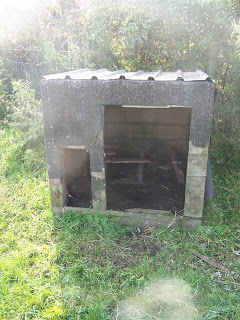 Ruby is trying ever so hard not to chase those sheep, and is being discouraged by Meh Meh, the pet lamb, who now lives in the field with the other sheep. The happy farmer moved her and her wooden kennel into the field a few weeks ago. Meh Meh, joins the rest of the flock to graze during the day, but at night, or if the storm clouds gather, she can be found happily chewing the cud in her little kennel. This causes some entertainment for the children as she has grown rather a lot, and her huge belly and legs, hang out over the edges of the kennel as she continues to squeeze herself into her living quarters, a privileged sheep indeed. Meh Meh always makes a bee line for Ruby when she spies her, and refuses to be chased away by her, instead gently head butting Ruby if she gets over excited. 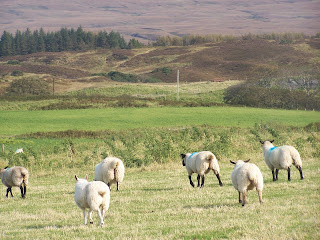 The other evening as we made our way through the field, youngest drew my attention to what seemed to be a large animal in the burn field. I couldn’t quite make out if it was a small roe deer sitting on its hind quarters, or a large group of hares all boxing. We walked slowly across the field and quickly made the shape out to be two very large eagles, sea eagles in fact. We stopped in awe, they were absolutely huge, one, on spying us, gracefully flew off and up into the air, however the other sat for seconds longer, and having read how a sea eagle attacked someone in Perthshire the other day, I did begin to wonder whether I shouldn’t turn and head back for the safety of the farmhouse. I really did not want to get gobbled up by one of these majestic animals, and I do tend to have an over active imagination, but just as my worries were bubbling up to the surface, the second sea eagle took flight, and joined its partner, we watched in awe as it soared off, high up above the hill, where it swooped and soared with its partner for quite some time, looking more like buzzards in the distance. Sea eagles have gradually been reintroduced to over the past few years, and I knew they were in the vicinity, so felt very privileged that they had chosen to swoop in on the farm, especially as they decided not to gobble me up in the process.
Until next time…..
Posted by Posie at 15:26 10 comments: 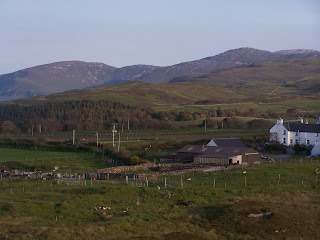 We arrived home from the mainland to the usual chaos, children and luggage literally fell out of the jeep as we pulled into the farm yard. The race was on to release Ruby from the confines of her kennel, a squirming, wriggling black mass, wiggled her way among us panting happily, jumping up and clawing, her huge tongue hanging out as she attempted to leave slopperty kisses on one and all. Charlie hen came running, waddle running that is, across the yard from the flower beds which she had been helpfully 'grubbing' in. 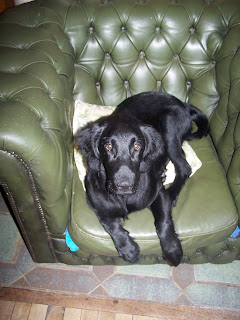 Mist the sheepdog bounded across to join the welcome party and then as word got out that we were back those sleepy cats stretched and yawned before clambering from the tractor cab to find their way into the farmhouse kitchen for a saucer of milk and a bowl of food. 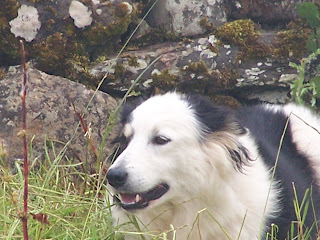 I struggled with the luggage from car to house, aware of an ever constant panting companion at my heel, a companion of the four legged variety, as Mist did the outside leg of the marathon and Ruby waited at the bottom of the stairs to take on the inside leg of the relay race. Charlie hen did her best to participate, and if the door was left open for a minute she could be found clucking around the farmhouse giving out those orders. It wasn't long before 'Meh Meh' the pet lamb had left the wooden home son has erected for her in a nearby field and joined in the welcome party, as we found ourselves constantly tripping over one animal or another.
The children of course abandoned the race fairly early on, in fact some did not compete at all, as televisions and computers were switched on and connections were resumed with cyberspace once more. 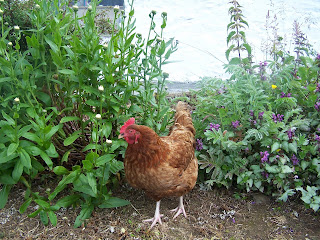 I have yet to decide which is more exhausting, or indeed more fun, leaving the farm for a few days, or arriving back home again. We were very fortunate as the happy chappy and the forester took charge of all of the animals in our absence, or vice versa, I haven't quite worked out which yet, and the holiday people duly arrived and got settled into their holidays in our absence. 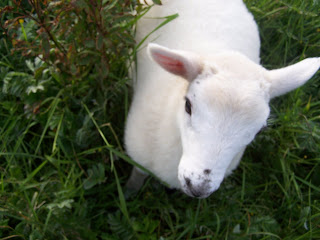 The trip had been a difficult one, saying our goodbyes to a very dear and special friend, a friend who has on so many happy occasions smiled as she too was enveloped in love as the whole clan gathered to welcome her on her arrival at the farm.
Until next time......
Posted by Posie at 17:07 9 comments: