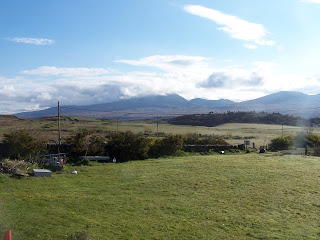 Two sets of googly eyes have been following my every move. Nose and beak pressed firmly against the window, one waiting for me to feed her and the other waiting for me to stop dawdling around, tidying up last little bits, and get outdoors and into the lovely sunshine, to take her for a run through the fields. Charlie our resident hen, and Ruby dog, have been waiting very impatiently on the patio. In the hedge, Mist the sheep dog lazes, keeping a watchful eye on events.
Charlie has always absolutely, firmly and resolutely refused, with a huge capital ‘R’, to use the nesting box and hen coup the happy farmer built for her several years ago. The gate to the enclosure lies ajar, the door to the hen hut swinging gently, long since deserted, or so I thought….. 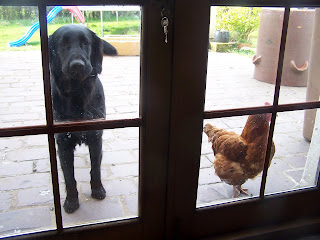 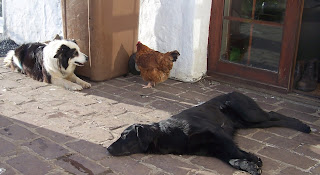 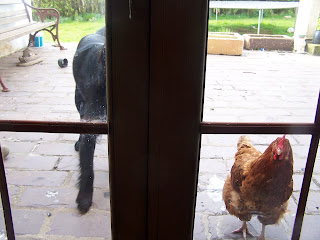 There was a huge kerfuffle coming from Mist’s kennel the other evening. When I investigated, I found the hen and the sheepdog having a ‘set to’. Prompt action was called for on my behalf, as it appeared that Mist was positively attacking Charlie. She appeared to have her cornered in the kennel, a quick ‘bark’ from me, and Charlie came strutting out, clucking away loudly, as she shook her flustered feathers down. Mist looked on submissively, ears bent firmly down, a guilty look spread across her face, as she sprawled across the length of her kennel. I looked across a few minutes later only to see the bold Charlie back in the kennel, and Mist, gently but firmly head-butting the old girl around the kennel, trying to nudge her back out, the way she had arrived in. Charlie was having none of it, and kept jumping back behind the dog, further into the kennel, and so it went on.

Each night since Mist has refused to share her kennel, but Charlie is a very determined hen, and so the sleeping arrangements now consist of Mist sleeping in the hedge and Charlie roosting happily in the kennel. 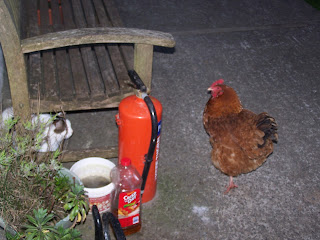 Imagine my delight the other day then, when I went over to the old hen coup and found it is being used once again, maybe not as sleeping quarters, but was laden with a nest of eggs. We have not had a ‘Charlie’ egg since last year, as Mist has been merrily guzzling her way through the nests Charlie had been making for herself around the various corners of the farm. Possibly Mist views it as rent for lodging in the dog kennel, maybe as a necessity to keep her coat all glossy and shiny, or perhaps more likely because she thinks only of her stomach! Charlie, however, refusing to be out done by that clever dog, has simply taken to laying fresh eggs on a daily basis in the hen coup….clever chick that she is!! 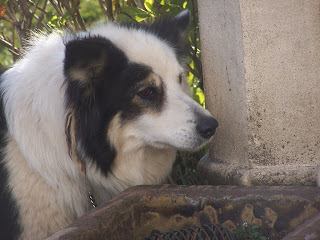 An eviction notice has been served.... 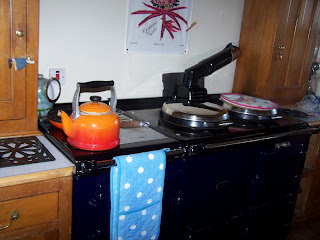 The latest addition to the farmhouse kitchen has been playing up and involved the Happy Farmer serving an eviction order.
The Happy Farmer's attention was drawn to our new lodgers when the kitchen began to have the faint smell of oil fumes. The game was a bogey when we overheard the lodgers merrily chirruping and tweeting away, the happy sounds echoing down the flu of the Aga and into the kitchen. Prompt action was called for as the Happy Farmer diagnosed the problem as uninvited lodgers 'nest building' in the chimney. 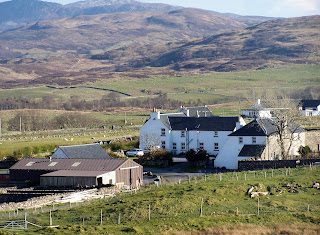 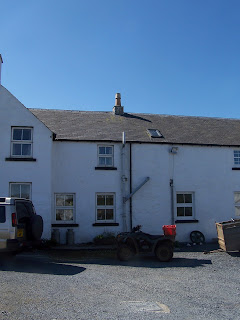 He immediately got to work, sweeping out the chimney with rods from behind the oven upwards. Much to his frustration those brushes and rods would not go right through. The lodgers departed, and the Happy Farmer had no choice but to scale the farmhouse walls and go up onto the roof, a past time which has become second nature to him with all of his various building projects.
The Happy Farmer removed one huge nest made of sheep's wool, twigs, plastic and all sorts of other odds and ends. These fantastic 'eco' birds had done a fabulous recycling job, the nest consisted of various bits of debris. Thankfully the birds were still at the 'construction phase' of nesting so there were no eggs inside.
Satisfied the eviction had been successfully carried out the Happy Farmer once again lit the Aga and was a tad disgruntled when fumes began bellowing out of the ovens like never before.  The whole house was 'gassed' out. More roof top clambering and chimney sweeping, and another huge nest was dislodged from further down the pipe.
Finally the Aga was re- lit, and going like a dream once more. 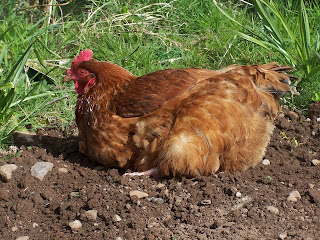 Next morning the lodgers had returned, merrily chirruping away as they commenced the re- build. A very disgruntled and frustrated farmer went back on the roof with chicken wire in hand only to find those birds had been extremely busy and there was another completed nest in situ.
Nesting has now resumed, but not in the chimney....the Cuckoo has arrived and appears to have moved onto the farm too....
Until next time....
Posted by Posie at 22:13 7 comments: