Bar-bugled with a Sore Spring hanger.... 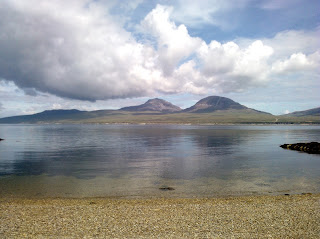 The island has been busy with visitors from all over the globe travelling here to sample all of the delights and charms this unique community has to offer, namely malt and magic, spectacular scenery and oodles of wildlife (happy farmer included, as well as a few of the other local worthies).

Even the 'dancing girls', the happy farmer's sister and cousin, sailed over for a repeat painting experience at the chateau down the road, one of the very few, very last remaining tin houses in Scotland. 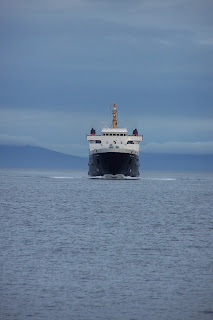 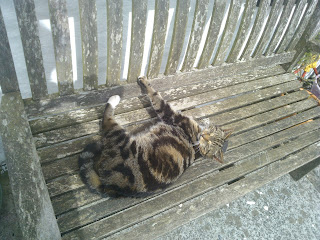 You would think those ladies after their last experience of toiling away in the blistering sunshine, painting the exterior of the house, while their brother performed his acrobatic balancing acts from the high ladder, would have steered well clear of the island for a little while longer. However such is the island's charms they just could not keep away and having nothing left to paint, bar the interior of the house, they made another pilgrimage to their island home, laden with paint and brushes.

Those girls, in the words of an old farmer from bygone days, 'booted and revved those engines', which roughly translates to working their socks off all day, slapping away with the paint brushes, and then getting heavily refreshed, by way of tucking into a plentiful supply of 'refreshments', into the wee small hours. It made for a good recovery and prepared them for another day of hard slog. As I mentioned in a previous blog, the most entertaining part of this is that the happy farmer's sister will tell you that she has, to quote the old farmer again, 'run up many miles on the clock', as she is, nearly sixty years old, (which is a tad of an exaggeration, but she holds that it does make her look ever more youthful if she piles a 'few extra miles onto the clock', or years onto her youth!!). 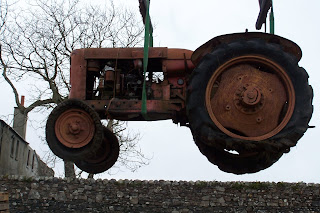 We do miss the old farmer from up the road and his lovely use of language. In his eyes all people were motor engines, some had a 'good chassis', others were simply 'bugled', and if you were really bad, well you were 'bar-bugled', if you were limping then you had a sore 'spring hanger', and if you weren't right in the head, the gear box was failing.  Those girls' 'gear boxes were definitely failing' and their 'spring hangers' were mightily challenged by the end of their painting experience, so I was heartily entertained when the new tenant in the 'chateau' commented on the gleaming paint work. Luckily he is a painter and decorator to trade, and has very kindly offered to touch up the stripey walls.

I want to ride my bicycle... 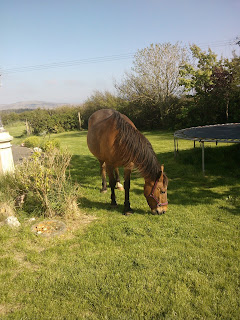 Madness and mayhem continue here as the sun splits the skies and the farm is bustling and buzzing with activity. A whole crowd of my family are over for a visit, the bed and breakfast is going like a fair and the cottages are booked up, so last weekend saw me doing sofa changeovers too, swapping one set of visitors off the bed settee for another….
Yesterday I took a well-earned break. I had been invited to cycle around the Isle of Colonsay with my action man brother and his super fit cycling girlfriend. I was encouraged along by the happy farmer who assured me, in his ever calm, happy state that he would look after the pottery, the farm, the bed and breakfast, the laundry, the children, the pet lambs, the horses, the chicks, the dogs, oh and Bramble, the birthday surprise Mist, our collie dog, introduced to us on Sunday morning. 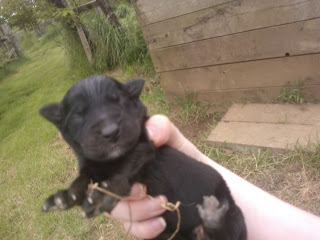 The only problem facing me was the lack of a bike, that and the fact I hadn't ridden one since I was about 12. The happy farmer, ever resourceful at overcoming life’s challenges, went for a quick rake through his handy shed and appeared some hours later with a rusty specimen, which had few problems that a quick squirt of oil and some pedal power couldn't
fix. He called me away from customers to have a quick check that the bike would be fine for me. Now the fact that both of my feet could sit flat and firmly on the ground reassured me that although I was a bit wibbly wobbly and shaky I would be quite safe.

Next day I kidnapped the happy farmer and his trailer to give me a lift down to the ferry port, I wasn't brave enough to free wheel down the very steep brae with all of the Lorries and passing traffic.
Safely deposited with the old rust bucket I purchased a round the world ticket at the ferry office and took my place among all of the seasoned cyclists and their shiny bikes, waiting for the ferry to Colonsay. 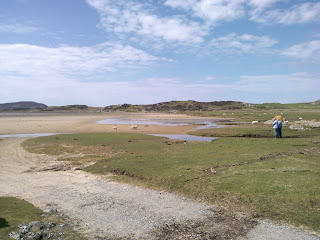 We sailed into Colonsay a short while later, cycling along the pier up to the only single track road on the island and we were off, and the challenges began, firstly there were the gears to get a hang of, I was putting in more pedal power than my brother put in for the whole day’s cycling just to make it up the first hill, if you could call it a hill. I quickly also realized that while my feet could indeed sit firmly on the ground this also meant my knees were up round my ears as I cycled along on old bertha. It didn't help when people with bottoms twice, even three times, the width of mine went swiftly past me while I was huffing and puffing away. I discovered that I do have a bit of a competitive streak after all, which quickly led to my behind becoming very saddle sore with all of the effort, indeed by the end of the day I had mastered cycling standing up in the pedals, or at least raising myself slightly just to ease the pressure as the roads seemed to get ever more bumpy, just to add to the challenges. 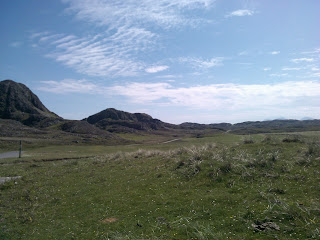 We cycled to nearby Oronsay, and then around the island, each twist and  bend in the road opening up more spectacular views of turquoise seas and white pebble beaches. The strong coconut scent of the gorse bushes in the air, the soothing sea breeze and the brilliant sunshine made for an amazing day, that and the fact that my brother swapped bikes with me half way round, which made my bike ride ever more amusing as I watched him pedaling like mad with his knees going way beyond his ears, and luckily I didn't get a puncture until we were two minutes from the ferry, having had a well-earned refreshment at the local hotel 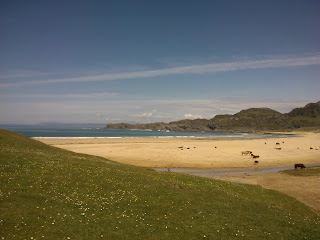