The happy farmer's away....so the animals come out to play.... 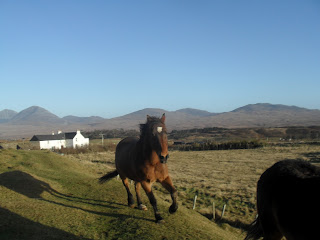 It’s a sure sign the happy farmer is away on the mainland, word must have got out, and so those cheeky animals have all taken it upon themselves to play up, again! 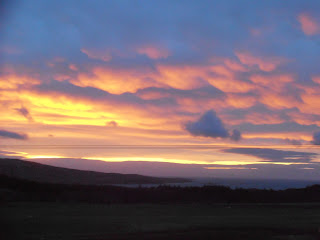 It started with a phone call in the ‘wee small’ hours, a message to inform me that Muffin, the cheeky pony, was out of ‘barracks’, and patrolling the farm, munching away on the grass beside the single track road. The thought of going our into the very wet, pitch dark night armed with a torch for a search light and a bucket as incentive, did not appeal, that coupled with the fact that I am scared of horses, and Muffin, who refuses to abide by the pony club manual, would almost certainly refuse to play ball and be caught by me, so I opted for the easier option of ‘phone a friend. The sleepy happy farmer’s reassurance put my mind at rest, he reminded me that there would be no traffic on the little single track road at that time of night, that Muffin would not stray too far, and that most importantly I hadn’t a hell’s chance of catching the little ‘B’, coupled with the fact that if I did, he was sure to stray once more. So a fitful night of half sleep and pony nightmares ensued, as I was woken by every tiny sound that echoed round the farmhouse. 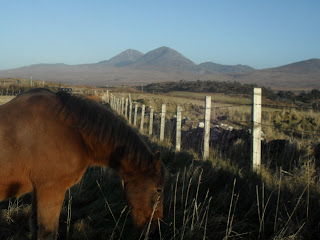 This morning Muffin was highly visible. He was stood at the shed doors, chomping his way through the soaking sugar beet, looking as if butter wouldn’t melt in his mouth. He will stay around there until teenage daughter arrives home off the afternoon ferry. He will happily do anything for her, and will immediately go home to barracks ‘without passing go’ once she gets hold of him.
Poor Muffin, his troubles started yesterday, I could hear him frantically neighing and galloping around the fields, all alone, and quite bothered. Initially I worried something must be up with Hansel, his companion, as the two are inseparable usually. Kitted out in ‘all weather gear’, I braved the lashing wind and rain, and made my way out the hill to check on the other horse. With the Happy farmer away on the mainland, somewhat unwillingly, my ‘farming duties’ had commenced. I was very relieved then to see Hansel in the far corner, by the burn, happily grazing away at the grass, and could see why Muffin was also making such a scene. It was pure, ‘unbridled’ jealousy. In the neighbouring field was another pony, stood next to Hansel, with only a fence between them. Muffin was galloping and neighing at the other end of the field, trying desperately to catch Hansel’s attention and coax him away from his new playmate, but to no avail. Today, Muffin was teaching Hansel a lesson, Hansel stood by the gate watching longingly as his ‘pal’ Muffin filled his belly full of hay and sugar beet.
Later on as I drove son to the bus stop, we saw one lone, ‘protesting’ sheep. Well, at least we decided she must be on a protest of sorts; probably about the speed the traffic races at  along the main road. That feisty old girl was insistent on toddling along the white lines up the middle of the road, stopping every now and again, and flatly refusing to budge for any passing traffic. I couldn’t see her markings at such a distance, so am unsure if she was one of our clan. Luckily the drivers here are very used to meandering livestock on the roads; it is part of island life.
Until next time…..
Posted by Posie at 10:10 12 comments: